Inferno: A Story of Terror and Survival in Chile Luz Arce 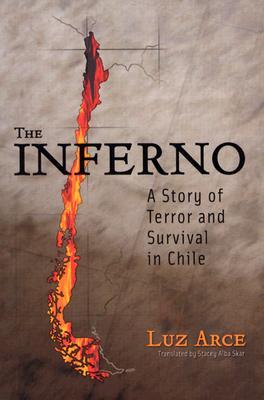 In the months following the coup, Arce served as a militant with others from the Left who opposed the military junta led by Augusto Pinochet, which controlled the country from 1973 to1990. Along with thousands of others in Chile, Arce was detained and tortured by Chile’s military intelligence service, the DINA, in their attempt to eliminate alternative voices and ideologies in the country.

Arce’s testimonial offers the harrowing story of the abuse she suffered and witnessed as a survivor of detention camps, such as the infamous Villa Grimaldi.But when faced with threats made to her family, including her young son, and with the possibility that she could be murdered as thousands of others had been, Arce began to collaborate with the Chilean military in their repression of national resistance groups and outlawed political parties.

Her testimonial thus also offers a unique perspective from within the repressive structures as she tells of her work as a DINA agent whose identifications even lead to the capture of some of her former friends and compañeros.During Chile’s return to democracy in the early 1990s, Arce experienced two fundamental changes in her life that led to the writing of her story.

The first was a deep spiritual renewal through her contacts with the Catholic Church whose Vicariate of Solidarity had fought for human rights in the country during the dictatorship. The second was her decision to participate within the legal system to identify and bring to justice those members of the military who were responsible for the crimes committed from 1973 to1990. Luz Arce’s book invites readers to rethink the definition of testimonial narrative in Latin America through the unique perspective of a survivor-witness-confessor.

Comments
Comments for "Inferno: A Story of Terror and Survival in Chile":