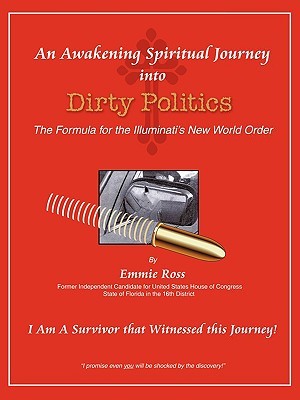 It is the code name for a secret shadowy government through present day corporations that has been setup by the 1st Antichrist to control the world affairs. In order to achieve his goal he has to overthrow our capitalist government, and replace it with his secret agemda of a Satanic New World Order under Socialism. Why did Jesus have to step in to protect the Independent Candidate for United States House of Congress in 2006?

An Awakening Spiritual Journey into Dirty Politic after Election 2008 will capture the Spiritual Holocaust that went beyond the moral fiber of ones imagination and comprehension of evil by the superhuman power of the 1st Biblical Antichrist. This nonfiction riveting book is an awakening of how our taxpaying dollars have been orchestrated by him on the Federal level of the American Government with its partners in crime, the Democratic Party, some Senatorial and Congressional Republicans and Independents secretly embedded in the Democratic Party, and the Liberal Media.

Four main ingredients are fueling it: greed, corruption, revenge, and power, which spell the Illuminati! As my epic journey begins inside the spoon of dirty politics in January 2003, I will unknowingly walk directly inside the spiritual warfare of the principality of evil by the inner circle of the Illuminati. With the Living God standing by me, I have survived my journey.

God wants the rest of the world to be prepared for what lies ahead. Evil and dirty politics can be defeated. That is why I have been chosen by God to expose my story to the world of what I personally witnessed.

Comments
Comments for "An Awakening Spiritual Journey Into Dirty Politics After Election 2008":